I never came across “sanctimony” before reading Philip Roth’s The human stain. The word occurs almost at the beginning of the novel, prominently at the end of a long sentence, “the ecstasy of sanctimony”.
“Ninetyeight in new England was a summer of exquisite warmth and sunshine, in baseball a summer of mythical battle between a home-run god who was white and home-run god who was brown, and in America the summer of an enormous piety binge , a purity binge, when terrorism – which had replaced communism as the prevailing threat to the country’s security, was succeeded by cocksucking , and a virile, youthful middle-aged president, and a brash smitten twenty-one- year-old employee carrying on in the Oval Office like two teenage kids in a parking lot revived America’s oldest communal passion, historically perhaps the most treacherous and subversive pleasure: the ecstasy of sanctimony”.  –
We know what they say: translator traitor, the Italian translation, by V. Mantovani of The human stain, La macchia Umana, , (Einaudi, 2001), .dilutes the rhythm of the English sentence,  transforms the vulgar and common “cocksucking” in a neologism “pompinismo”, (that after communism and terrorism, we have to admit it, sounds rather funny), and the high-sounding “sanctimony” in the common “ipocrisia”.
Hypocrisy is obviously not the same thing as sanctimony,  although connected to it, googling it I found : “sanctimonious hypocrisy”
The Oxford English dictionary defines “Sanctimonious” as follows: “Of pretended or assumed sanctity piety,  making a show of sanctity , affecting  the appearance of sanctity”., and quotes Shakespeare’s Measure for measure , (I,ii, 7)
“Thou concluded like the sanctimonious pirate, that went to sea with the ten commandment, but scraped one out of the table.”
In Measure for Measure, Angelo, as the personification of the law, does not accept the validity of the civil marriage of Claudio and Juliet, decides to enforce the rule that fornication is punishable by death, sentences Claudio to be executed. We discover at the end that Angelo does not apply the same strict rule to himself

Nomen Omen: Senator Rick Santorum always equates gay civil marriage with bigamy, polygamy and bestiality. Santorum’s ancestor apparently came from Riva del Garda, near Mymosa Moon’s little villa. Now being the south of Germany as well as the north of Italy, it is one of the most affluent areas in Europe. Had his grandfather been living there now, he wouldn't have migrated to America. Probably one would think that we Italians need indeed a little bit of sanctimony more than Americans, and that the migration of the Santorums has been a great loss for us. But sanctimony is a temptation for every power in every country.  I do not forget  that Mara Garfagna, minister in  Berlusconi’s government , an ex-actress  who did not become minister for her beautiful mind, proposed a law, calling for  more  severe punishments and restrictions of prostitutes, their pimps and their clients. Berlusconi enthusiastically and loudly supported the law. Tons  of laughter have buried it. Italian journalist Guzzanti has even coined a neologism“mignottocrazia”, Whorecracy, for Berlusconi’s regime. The story shows, however,  that once in power, even persons of non-impeccable reputation, make it difficult for others to get where they are by the same means. Sin has to be a privilege, not a common resource available to everybody, and consent and power have to be conquered and exercised always at the expense of someone else. 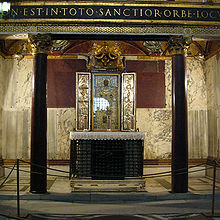 TheSancta Sanctorum chapel, Lateran Palace Rome.
The Holy of Holies Tiberian Hebrew: קֹדֶשׁ הַקֳּדָשִׁים Qṓḏeš HaqQŏḏāšîm) is a term in the Hebrew Bible which refers to the inner sanctuary of the Tabernacle and later the Temple in Jerusalem where the Ark of the Covenant was kept during the First Temple, which could be entered only by the High Priest on Yom Kippur. *Wikipedia(.
Pubblicato da MyMosa Moon alle 09:22